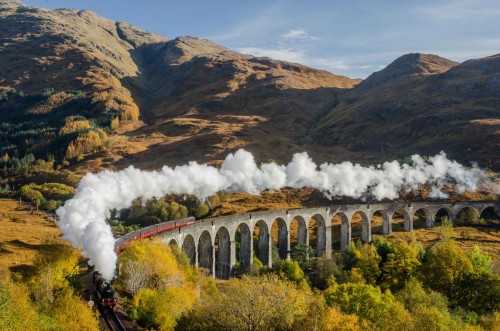 Loch Shiel was once an important route for trade and communication between the railway at Glenfinnan and the communities of Moidart and Ardnamurchan. However, improvements to the road network mean that the loch is now a more peaceful place, and the few boats can all find their own quiet part of its 18 mile length.

You'll need a boat to fish Loch Shiel. If you have your own boat, then permits and access to a slipway can be found in Acharachle at the southwest end of the loch. This is currently the only place for visiting anglers to get boats onto the loch. Orkney longliners can be hired for either a half day or full day from the Loch Shiel Hotel in Acharacle.

Trout are plentiful in the loch and impressive specimens tipping the scales at over 10lb are regularly caught. Fly fishing and spinning work best in the bays and along the shallow contours with trolling more effective in the open water. Or what could be better than a spot of dapping in the golden light of a calm summer's evening waiting for the tug of a trout to disturb the reflection of the surrounding hills on the water.

For fishing on the River Shiel go to www.rivershiel.co.uk

The Loch Shiel area is rich in history and wildlife. The Glenfinnan Monument marks the spot where Bonnie Prince Charlie raised his standard and began the second Jacobite uprising. Time your visit right and you might see the Jacobite Express steam train crossing the Glenfinnan viaduct made famous by the Harry Potter films.

The ruins of Castle Tioram sit in a strategic location at the mouth of the River Shiel. The castle is not open to visitors, but at low tide it is possible to walk around the formidable walls that date back to the 13th century.

Wildlife watching cruises are available on Loch Shiel and eagles, otters, black-throated divers are all common sights. Hotels and cafes can be found in both Acharacle at the south and Glenfinnan at the north of the loch. Acharacle also boats an excellent bakery, fish and chip shop, outdoor shop and regular local produce markets in the village hall. The Loch Shiel Festival takes place every spring showcasing local music and poetry.

How to get here

How to get here

Loch Shiel is a large loch and, though roads pass both its northern and southern shores, fishing access is best taken from Acharacle where permits can be purchased and boats hired.

Cross Linnhe via the Corran Ferry and continue on the A861 through Strontian until you reach Salen. Turn right here and follow the road for approximately two miles until you come into Acharacle.

The Loch Shiel Hotel is on your right and the out of doors shop on your left.

If you'd like to send an email to this fishery, you can simply fill in the form below.